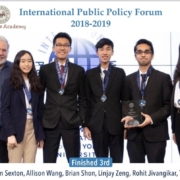 Students from Ivy Bridge Academy are preparing to compete as finalists in the 20th annual International Public Policy Forum (IPPF) global debate competition. The team has advanced to the “Elite 8” round of the IPPF, a global debate contest sponsored by the Brewer Foundation and New York University (NYU).

The IPPF is a one-of-its-kind collaboration between a law firm and major university providing a debate platform through which high school students hone their debate and advocacy skills on issues of public policy in written and oral debates. Students are debating the topic, “Resolved: The benefits of artificial intelligence outweigh the harms.”

The IPPF Finals competition will occur virtually in 2021 for the first time in IPPF history due to the COVID-19 pandemic, to ensure the safety and well-being of IPPF competitors. The IPPF Finals will take place on Saturday, May 1. Ivy Bridge Academy will be one of eight teams – representing schools from five U.S. states and two foreign countries– competing for a $10,000 grand prize and the title of “IPPF World Champion.”

“The students who competed in this worldwide debate program this year reflect the qualities that lead to excellence – effort, energy and enthusiasm,” says William A. Brewer III, chairman of the Brewer Foundation and founder of the IPPF. “We are especially proud of these students who have earned the opportunity to compete in an advocacy forum unlike any other – the IPPF Finals. They will now supplement months of written scholarship with oral advocacy in pursuit of the title of 2021 IPPF World Champion.”

“Despite the challenges students around the globe are facing due to the pandemic, these students chose to participate in a rigorous academic competition and have excelled,” Brewer added. “We look forward to seeing them compete – and celebrating their achievement – during the IPPF Finals.”

The IPPF is the only competition that gives high school students from around the world the opportunity to engage in written and oral debates on issues of public policy. The debate competition was founded in 2001 by the Brewer Foundation to promote academic achievement and public advocacy. The IPPF received more entries this year than it has since 2016 – making this year highly competitive. The essays were reviewed by a committee, which determined the top 64 teams based on the overall quality of each 2,800-word essay.

In November 2020, the “Round of 64” teams began a single-elimination, written debate competition. Each team was assigned a position (affirmative or negative) and then volleyed papers back and forth with another team via email for the next six weeks. A panel of judges reviewed the essays and selected the winning teams. The next two rounds also took place in written form.The IPPF Finals give students the opportunity to participate in oral debates in front of some of the world’s foremost experts in debate, business, law and politics.

This year, IPPF judges will include Brewer and New York University President Emeritus Dr. John Sexton, among others. The winning team will take home the “Brewer Cup” and the $10,000 grand prize.

A competition bracket for the IPPF Finals is available on the IPPF website: www.ippfdebate.com. The “Elite 8” teams are:

About the IPPF and the Brewer Foundation: The IPPF was founded in 2001 by the Brewer Foundation and is now jointly administered with New York University. The program is available to all high schools around the world – public and private – for free. The IPPF is endorsed by leading forensic agencies, such as the National Association for Urban Debate Leagues, the International Debate Education Association, the Impact Coalition, Associated Leaders of Urban Debate Leagues, and the National Debate Coaches Association.The Brewer Foundation is a private, non-profit organization funded by companies, individuals and the national litigation firm of Brewer, Attorneys & Counselors. With offices in New York and Dallas, the Foundation has achieved widespread recognition for its efforts to create, fund and manage a variety of educational outreach programs.

About Ivy Bridge Academy: Ivy Bridge Academy offers a debate program that provides a chance for students to improve public speaking skills and engage with current events through the activity of Debate. Currently all of IBA’s debate classes are virtual. IBA prides themselves in having passionate, skilled coaches that teach students to have the confidence and experience to debate not only in local but also national tournaments.